The pastels are scraped with a blade, or in my case an old teaspoon, to make weathering type powders. I've used brown, black, white and whatever the one is that looks like rust. Colours are not my strong point.

On these two I used a dry brushing technique to apply the pastels onto the surface that had been sprayed with fixative. I think I overdid the one on the left, but it definitely looks weathered!

I found that when I tried the same technique of an open plank wagon, the dry brushing over the fixative seemed to rub the original decals away. You can see that on the grey wagon in the photo. 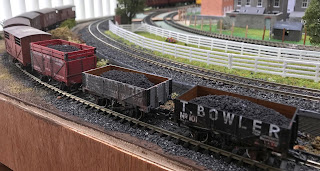 Again, I'm not bothered because I'm sure there were wagons that got this filthy and distressed with age, but I changed my approach ofter this.

The challenge is to do little and add rather than have to try and brush out too much. That's why I thought I'd try using decal fix, applying it to the areas I wanted to weather. That worked ok, but I need more practice.

Here's a picture of some of the wagons I did this way. The first thing I did was to paint them all over with a black wash that I let almost fully dry before adding the powdered pastels. I then used a stiff dry brush to work the colours into the surfaces.

If you look closely you'll see an area on the one of the right that doesn't seem to have any colour added to it. Perhaps it just got washed by someone!

I quite like the dull effect and the addition of some white on these.The rust on the one on the left might be a bit heavy, but I could brush this in a bit more because these colours aren't fixed as yet. I might spray them with a clear matt varnish, but if I do that the effect will be permanent. As it stands, I think a good scrub in warm soapy water would clean most of the dirt and grime away.

Here are the last three I've done. I'm particular fond of the rust and dirt on the running board.

Overall I think the dry brushing black wash and decal fix worked the best and it was certainly easy to clean off if I wanted to undo something. Having said that there was one moment when I had got the roof as I wanted it, only to mess it up by accident doing the side and then having to clean it and reapply the finish.

So pro's and con's to each technique.
Posted by Richard at 10:24 am