If you could travel back in time, what would you change about your life? Of course, if time travel has been developed, then you might already have done this at least once and the whole space-time continuum thhas been twisted in and around itself into some horribly contorted knot as you've tried to rearrange everything that each previous change has unwittingly affected elsewhere along your timeline! But let's not go there.
If I could travel back in time I might be tempted to tell my younger self that becoming a church leader would not be worth the pain and sadness that it brought into my life, but then I'd miss out on doing some remarkable things with some remarkable people. I'd miss out on all that experience of seeking to help people, of learning how to do that to the best of my ability (even if they didn't appreciate it!), and the spiritual and emotional growth that comes through all of that.

Over the weekend I got one of those reminders that nothing is ever wasted. Someone once said that God does make junk, but there are times when I have to say that looking at my life I feel I've had cause to question that assertion! There is much that I would change if I could, but I can't. There are some poor decisions that I would change, some habits I'd like to change, some issues I'd address much sooner than I did.

Our last two years in full-time church leadership were pretty tough. In fact they were the just about the worst two years we've been through. At the end it felt as though everything we'd done over the previous twenty years was just rolled up like old newspapers and thrown in the bin. We, I, felt totally rejected and discarded. It felt like a complete waste of my life. It still does some days. If I could go back in time, I'd probably be tempted to avoid those two years at all costs. If I did, we wouldn't be where we are today.

This weekend I was reminded that God doesn't waste things, he doesn't make junk. It came in two unlikely conversations.

In the first I heard the story of one person's working life and how failing in one area brought success in another. They could have persevered and passed a particular exam and that would have taken them down one route, but instead, having failed, they went in a new direction which turned out to be far more successful for them.

The second conversation came about because someone recognised in me something that they needed. Through simple conversations we'd built a relationship and now they needed someone with whom they could talk through a challenging situation and they called me.

Interesting isn't it, that if I could travel in time I would probably change so many things that I doubt I'd have been there for this friend in need. I'd have studied sports therapy or become a physiotherapist. I might have been working with elite athletes or weekend warriors. Who knows.

I am what I am, as Popeye used to say, but unlike Popeye I know I am not all I could be. In God''s hands he continues to shape my life, and he continues to use everything I've experienced to shape me. I seem to remember that Michael Angelo was once asked how he turned a lump of marble into a beautiful carving of a horse. "Simple," he said, "you just chip away everything that doesn't look like a horse."

My prayer for this Monday morning is that God will continue to chip away everything that doesn't look like the life he wants for me. If it doesn't look like a horse yet, that's because it isn't finished!
Posted by Richard at 8:01 am 1 comment:

Rambling thoughts of a non-economist on budget day

I believe there is a little matter of a budget being announced today. Get ready for all the analysis and speculation about the relationship between the plans and the upcoming election. Get ready for all the arguments about who has the right numbers and who's spinning them to make them look better or worse than they really are. Prepare yourselves for the voices of big business and the city bemoaning or celebrating something.

In all the bluff and thunder of budget days in the past, recent years have become somewhat antiseptic. There are very few shocks and surprises. Perhaps there never really where. There will be lots of self-congratulations and probably a few stern warnings that the process isn't over yet. I dare say a lot of important things will even get lost in the smoke and mirrors of complex fiscal accounting. And then the counter arguments will start.

But even if the numbers point to a positive state of affairs, even if the chancellor can demonstrate a recovery with falling unemployment and a few other positives, there remains a single, important question to be be asked.

Who has paid the dearest price for getting us to a positive position and who will continue to pay that price? As the gap between rich and poor continues to expand, we must answer this question. I grow increasingly weary of calls to protect the city (the financial district) as if it is the engine room of the economy. It may be, but only at the cost of a manufacturing and engineering sector that has shrunk exponentially over the last 3 decades.

Executive pay continues to outstrip the wages of the ordinary employee to the point where a CEO is, in no uncertain terms, grossly overvalued, especially so in today's economy. The whole thing is unbalanced in a hugely detrimental way. We're not talking about seeking some idealised equality, but some sense of equity wouldn't go amiss.

If the figures I saw a few weeks ago are correct and our debt is rising at the alarming rate of £5,000 a second, then by the time this business day is over we will have added around £150M to that debt. That can't go on. But if we are truly all in this together, then the solution must be to share the burden not equally but equitably among the people. I just wonder if we're too scared to do it.
Posted by Richard at 8:06 am No comments:

I think I had my most active day on Friday since I began wearing my Polar Loop. According to my diary, I managed to do 319% of my daily activity goal! It all breaks down like this: 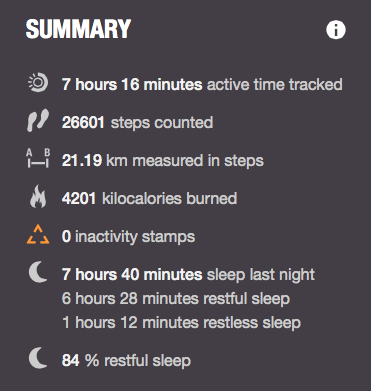 It's quite funny when you read the standardised notes that go alongside the analysis. Apparently I spent 8 hours sitting down, but not for too long at a time. I think after 3 hours on a tennis court a lie down was more likely than sitting down!
Posted by Richard at 8:55 am No comments:

Email ThisBlogThis!Share to TwitterShare to FacebookShare to Pinterest
Labels: exercise

So, yesterday I missed my 10k step goal ending a run of 188 consecutive days. The reasons were simple enough: we travelled to Nottingham for a celebration lunch and I also managed to pop my calf muscle again while coaching in the morning. Taking these two together, I decided to rest my leg and forgo my target for the day.

Now, once the calf strain is better, I need to work out whether to return to focussing on 10k or setting a different daily goal. As you know, I received an activity monitor for Christmas, the Polar Loop, and I could focus my attention on hitting my activity goal every day rather than the step challenge. The interesting this is the difference between the two.

Generally speaking, if I play tennis for an hour or so or do some interval training for an hour, I usually hit my activity goal but not my steps goal. On the other hand, I can go out and walk and hit my step goal but miss my activity goal. I think it will be interesting for a while to focus on the daily activity goal as measured by the Loop, and thereby build a picture of what the impact of doing is likely to be. As you've probably already guessed if you read some of my ramblings about health and exercise, the data fascinates me and can be part of the motivation for getting up and moving in the first place.

So I think I'll go for activity for a while, and se how the data stacks up!
Posted by Richard at 8:06 am No comments:

This is my activity report for today. 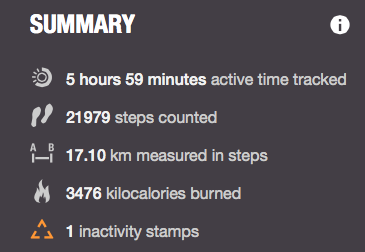 Surely I'm allowed one inactivity stamp after such an active day!
Posted by Richard at 11:06 pm No comments:

Well, we've reached the end of February and the numbers loo like this:

Not bad. No days missed, which means 6 straight months of hitting 10K a day. In fact two more days and that will be 183 days, passing the half-way point for a year.

Comparing these numbers with Polar Loop is quite interesting.

Steps: 464940 (remember this is body movements converted to steps)

In other words, I was pretty active in February!
Posted by Richard at 7:11 am No comments: