I've never been one for genealogy and digging into family history. Bu there are one of two things that intrigue me from my family's past. My Grandfather (Arthur Pool) was a Methodist missionary in Gambia, and a number of years ago I discovered that through him we have connections with some rather well known Methodists. It was interesting to think that I wasn't the only theologian in the family! 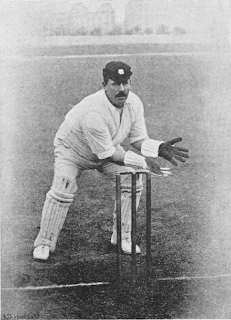 The other character that has always fascinated me was one Mordecai Sherwin. I remember being told a story about him being the first wicketkeeper-batsman, but I'm not too sure how accurate that is. Anyway, by chance, I was asked to lead the funeral for someone who had been a cricket statistician and founder member in fact of the Association of Cricket Statisticians and Historians. It turns out Mordecai is quite well-known in such circles.

A publican by trade, he captained Nottinghamshire and played three times for England. Not exactly of an athletic build (5'9" and 17St), as you can see from the photograph, nevertheless he was apparently quite nimble. He also played football for Notts County as a goalkeeper.

It's even said that the name of Sherlock Holmes is partly inspired by Mordecai (Sher-win)!

Statistically he took 611 catches and 225 stumping in 328 First Class games. I've no idea how that compares with his contemporaries, it's just nice to see the data. He was also named Wisden Cricketer of the Year 1891!
Posted by Richard at 12:45 pm No comments:

Email ThisBlogThis!Share to TwitterShare to FacebookShare to Pinterest
Labels: family

I managed to hit the target every day for the whole month. Not too surprising given the coaching, training and playing that goes into a typical week. There some days when I wouldn't have made 10k had I not gone for a walk, and under other circumstances I probably wouldn't have done so had it not been for setting myself the challenge. I even walked from Kings Cross to Fenchurch Street one day to make sure I made my 10k steps when otherwise I would have taken the tube to Bank at the very least and walked from there.

This, for me, is what makes the challenge interesting. Not so much the target, but the commitment to doing to do it. Anyway, just for the record (and with some comparisons to come) here are my September stats.

Given that I started in August, I've managed 44 consecutive days of 10k or more. I've also passed 500k steps already.

My A360 has been recording too, and the data is as I'd expect with the exception of the "pushchair day" I blogged about recently! Heavy coaching days and days when I either play or train show up really clearly in any comparison. What was interesting was the day I pushed Tobias in his buggy. Because my arm wasn't moving very little data was recorded as activity. I wonder what would happen if you went running on a treadmill but held onto the bars. Would it record any data then?

Overall I'm pleased I've completed a whole month and especially pleased that on those days when I might have chosen to sit on the sofa and do nothing, I actually got out and did something. Let's see what October brings.
Posted by Richard at 7:47 am No comments: