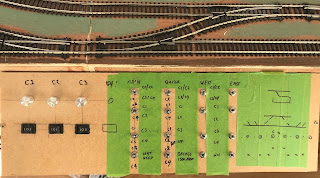 This is in no way the final design or finished item, but I thought I'd do a short post about my prototype control panel.

As you can see it has a lot of switches and currently 3 controllers with room for a fourth. The basic plan was to be able to control up to three trains at a time on three different parts of the layout. It's all DC rather than DCC. In simple terms DC controls the track, DCC controls the locomotives.

To allow a train to move from one track to another you need to be able to pass control of each track to the cab (the bit with the directional switch and control knob). Each track is wired through 3 switches allowing the user to select which cab controls what track or tracks.

The system isn't foolproof and because some track is shared by the outer loop and the East/West beaches it requires some form of isolation to prevent trains on different tracks running when they they shouldn't. The points provide some isolation, but not enough, so I've installed a switch to isolate part of the outer loop where a train can be parked while another uses the shred piece of track. At least that's the idea, I haven't tested that bit yet because it requires me to cut the track and I haven't been brave enough to do that yet!

Initially I thought I was going to need four switches per block of track, but it turned out I only needed three so the fourth switch is redundant part from the one that will isolate the outer loop from the shared track.

I've left space for point control on the right hand side. This will be a series of momentary switches to shift the points.