Trimming out the new roof windows 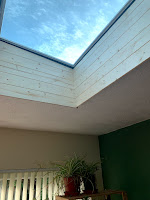 We had some new roof windows fitted and I decided I wanted to trim them out rather than have the window fitters do it. There were moments when I began to regret the idea, but in the end we got it done and it doesn't look to bad.

The problem was that whoever did the original windows didn't seem to like the idea of perpendicular and square. In fact one is so far out of square that in the end it wasn't worth the effort to try to put that right.

The defat now is whether to leave them as they are, maybe applying a clear wax or varnish, or whether to paint them. I think print, Anne things leave. Time will tell.

Email ThisBlogThis!Share to TwitterShare to FacebookShare to Pinterest
Labels: woodworking