I needed to make a simple fence system for a new bench top I made. Some time ago I incorporated an MFT-style top into a bench in my workshop. This is a bench top with 20mm holes set in a 96mm pattern over the surface. It allows precise 90, 45, 30 & 60 deg cuts to be made and the square up assemblies and a whole host of other things. It's quite the versatile bench system.
In the process of cutting some MDF for a project I had a rather large piece of 18mm left over, so I trimmed it to what I thought was a manageable size of 1800x900mm (turned out still to be rather heavy to carry around so not as 'portable' as I thought) and set about drilling it out in the 96mm pattern. I used the Parf Guide system and after a couple of hours I had a nice series of holes across the surface. 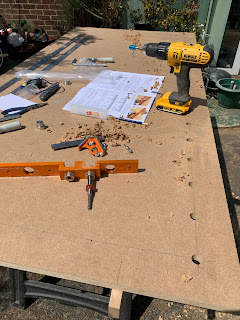 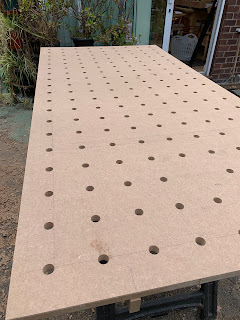 I toyed with a few ideas for making a fence and in the end decided to use some aluminium extrusion. I'd used the same type of thing on the bench in the workshop. The question was did I buy some more of the fence-dogs for this fence or did I use the ones I already had-simply moving them from one been to the other-or did I make something new?
Something new won the argument in my head so I made a prototype anchor that held the aluminium against a bench dog. I also made a simple sliding stop using MDF and some M5 track nuts and screw knobs. 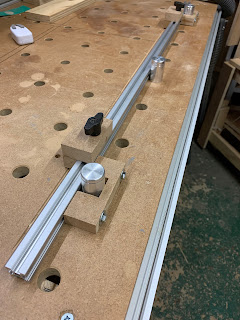 These worked quite well. They held the extrusion in place, pulling it firmly against the bench dog and it was nice and square to the rest of the bench. The only problem was that using MDF in this way to make the clams was not the best option. They just felt flimsy and I thought there must be a better solution.
Then I remembered the 3D printer and got to work designing the parts for 3D printing.
The end result is an effective clamping system and a smooth operating stop. I've drilled a couple of 20mm holes in my bench that houses my mitre saw so the fence can used there too.
All in all I'm very pleased with the end result. 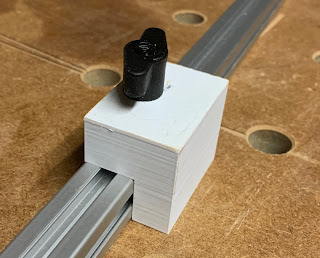 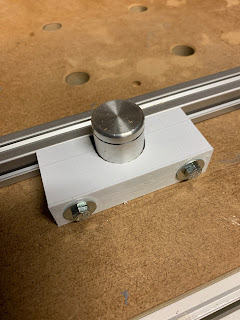 I swapped the hex head bolts for some with hex sockets.
Posted by Richard at 3:37 pm

Email ThisBlogThis!Share to TwitterShare to FacebookShare to Pinterest
Labels: woodworking